Pope Benedict the Fourteenth, alarmed at the excessive facility wherewith dispensation were then obtained, renewed, by a solemn Constitution, (dated June 10, 1745,) the prohibition of eating fish and meat, at the same meal, on fasting days.

The same Pope, whose spirit of moderation has never been called in question, had no sooner ascended the Papal Throne, than he addressed an Encyclical Letter to the Bishops of the Catholic world, expressing his heartfelt grief at seeing the great relaxation that was introduced among the Faithful by indiscreet and unnecessary dispensations.

The Letter is dated May 30th, 1741. We extract from it the following passage:

The observance of Lent is the very badge of the Christian warfare. By it, we prove ourselves not to be enemies of the Cross of Christ. By it, we avert the scourges of divine justice. By it, we gain strength against the princes of darkness, for it shields us with heavenly help.

Should mankind grow remiss in their observance of Lent, it would be a detriment to God’s glory, a disgrace to the Catholic religion, and a danger to Christian souls. Neither can it be doubted . . . that such negligence would become the source of misery to the world, of public calamity, and of private woe.

To be noted is the language of the day by a pontiff of the day, this warfare business and the like. But equally noteworthy is that “detriment to God’s glory,” with focus on what’s owed God as opposed to our familiar focus, on what’s good for us.

The new liturgy since after Vatican 2, for instance, leaned over backward to inject language and ritual intended to provide an increased “pastoral” focus, which is not missing from this pope’s message, to be sure.

Nor is what’s owed God missing from today’s official church utterances, while the day-in and day-out tenor and tone and language implies, I think, a more social-service mentality.

Do not be fooled by the near-unanimity of support, writes Fr. Hunwicke.

“Only four bishops voted against Sacrosanctum Concilium“. Dishonest commentators glibly use this fact to imply that all the changes which were introduced after the Council were enthusiastically mandated by the Council.

Not in a million years. The point is that the vote for SC [the council document on liturgy] would not have been anything like so overwhelming if the Fathers had realised that, as far as the radicals were concerned, they were being dishonestly tricked into signing a blank cheque.

The chief architect of post-council changes, Msgr. Bugnini, at one point telling Pope Paul VI one thing and the commission he ran another. Oh boy.

Francis makes exception to his ban, keeping supporters of the ban off-balance just a little, lest any take him for granted.

Later: Sorry, did not identify FSSP, here identified as “the Priestly Fraternity of St. Peter, a society of apostolic life which celebrates the Roman rite according to the liturgical books in force in 1962.”

The priestly fraternity was founded in July 1988 by 12 priests of the Society of St. Pius X, and several seminarians. The founders left the SSPX to establish the FSSP after the society’s leader, Archbishop Marcel Lefebvre, consecrated four bishops without the permission of St. John Paul II.

There are currently about 340 priests and 180 seminarians in the FSSP. It has parishes and chapels in 147 dioceses in North America, Europe, Oceania, Nigeria, and Colombia.

More here about them and their history.

Aka Seventh Sunday in Ordinary Time, where we have in Luke’s Gospel, Jesus talking:

“To you I say,
love your enemies, do good to those who hate you,
bless those who curse you, pray for those who mistreat you.

Another hard saying from the Lord and Master. We groan at it. He sees the reluctance and asks, “Will you also go away?”

To which our bewildered, self-serving, self-correcting, “Lord, to whom shall we go? Thou hast the words of eternal life.”

That so? Not so sure, we add, “I believe, Lord, help thou my unbelief.” The best we can do at the moment.

He seizes the moment: “Thy faith hath saved thee. Go thou and sin no more.”

The whole package. We walk away like the base-runner who just stole second, index finger pointing up.

Not our call anyway, as each of us knows. But can’t wait for heaven? Now you’re talkin’. Very important Christian thought that is.

Purgatory part of the deal, yes, offering a goad to good performance and not to be dismissed. But we need more than a goad, which is where heaven comes in? I think so.

In motivational terms, we’re talking about here. High praise for something to say it works for us, no? Yes.

So let’s not forget the joy to come when, cleaned up for the experience (purged), we cash in, if you pardon the earthy expression.

Or as the young Jesuit John Berchmans made his motto centuries before, Quid hoc ad aeternitatem? How does this make sense — whatever you’re doing — in view of the afterlife?

In case you missed this. Nothing in Trib or Sun-Times, however. 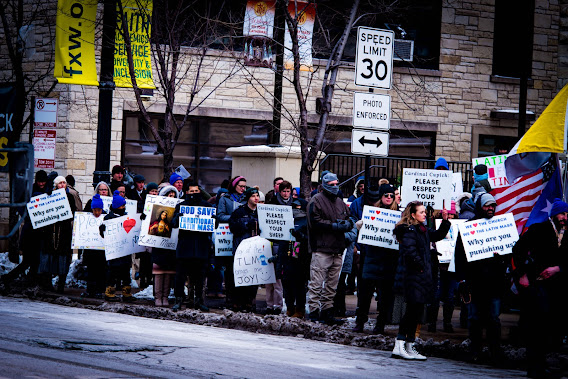 Bagpipes sounded on State Street, and a truck with flashing images of the Mass of the Ages rolled by. We stood shoulder to shoulder or knelt on the sidewalk and prayed the Rosary with Holy Name Cathedral looming large behind us. Men held signs aloft for the traffic to read: “Cardinal Cupich: Why are you punishing faithful Catholics?” It was the First Sunday of February.

And the citizens were restless.

Over two hundred of us gathered there. Men, women, even a few children (bundled up well against the cold). There were Chicago’s quintessential old Polish ladies in fur coats, and old men too, but the majority were millennials and gen-Zers. A mom in her third trimester walked about with an iPhone filming the livestream. A thirty-something dad led us through fifteen decades of the Rosary, interspersing the mysteries…