Gets a kick out of this.

The prelate offered a pagan blessing dotting paint onto the lion’s eyes, nose, mouth, ears and body while reciting the invocation:

“Good fortune upon your head, miraculous light glittering to your eyes, your ears capturing sounds from all directions. May the most favorable auspicious big fortune and great profit be to you throughout the whole year, from the beginning all the way to the end.”

He did versions of this ritual at St. Therese Chinese Catholic Church in 2016 and more recently at Carmel Catholic High, in Mundelein. 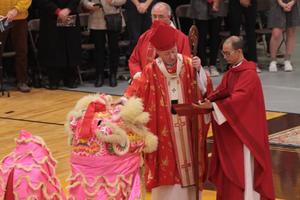 Cardinal Blase Cupich visited Carmel Catholic on Tuesday, January 7, 2020 to preside over an all-school Mass celebrating the Lunar New Year, a prominent liturgical custom in certain Asian countries. This Mass of Thanksgiving highlighted the cultural importance of family, service, and gratitude — above all, gratitude to God for the blessings we have received.

Meanwhile, he has strict requirements, in minute detail, for Latin-mass sayers beginning later in January, described at length at this Church Militant page.

Jim Bowman covered religion 1968-78 for the Chicago Daily News, since then has written books, articles, etc., mostly on corporate history but also on religion (Company Man: My Jesuit Life, 1950-1968), and more recently on politics (Illinois Blues: How the Ruling Party Talks to Voters, -- Lulu.com, Kindle). Longtime Oak Park, Illinois, resident, he lives now on Chicago's North Side, where four of his and Winnie's six children live close by. View all posts by Jim Bowman